Living Ecosystems is one of the two partner companies which have co-ordinated all the ecological mitigation for the re-development of the former Royal Ordnance Factory at Chorley in Lancashire, England. The factory is owned by BAE Systems and was the second largest munitions factory in Europe covering 375 hectares (900 acres / 2 square miles). 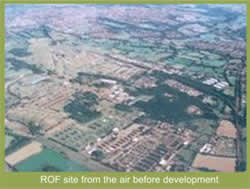 BAE Systems, in conjunction with Redrow PLC, Barratt Homes and the Architects Cass Associates, are re-developing the former Ministry of Defence Factory. The development is one of the largest & most ambitious brownfield regeneration schemes ever undertaken in the North of England. The project has been sponsored and championed by the Northwest Development Agency. The £400 million first phase of the development is now approaching completion and includes the re-development of 170 hectares (420 acres) of derelict land into commercial and residential property. This should bring more than 10,000 new jobs to the district as well as more than 3,000 new homes including the model Buckshaw village development.

The larger second phase of the development has now begun.

This phase of the development includes the creation of over 50 hectares of parks and nature reserve, comprising both pre-existing and especially created wildlife habitat. This process is now well under way and has involved a whole array of ecological mitigation measures. Measures ranged from the relocation of individual trees to the creation of entirely new woodland & wetland. It was also necessary to create a number of new landscaped hills using the 1,000,000 cubic metres of concrete waste arising from the demolition of the former factory buildings. 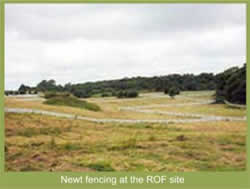 The development has incorporated the principles of sustainable development at every stage including wildlife protection and sustainable urban drainage systems. There is also an eco-friendly village built in conjunction with scientists from University of Manchester, who are testing various experimental and environmentally friendly principles. The homes will use a variety of energy sources, from geo-thermal and solar power to wind energy. The scheme will become a show village after it opens on 25 May 2006. Living Ecosystems is responsible for all the ecological aspects of the development and has completed a range of work in relation to this project. This has included protected species survey & mitigation, habitat creation, on-going habitat management, landscape design, management plans and the production of Environmental Impact Assessments. A range of protected species and their habitats have been safe-guarded within the development. These include bird, bat and amphibian species.

United Utilities is laying a £11million pipeline as a back-up to water supplies which usually come from the Lake District. The new pipeline -- 14km in length -- is being laid along the route of the River Hodder between the Trough of Bowland, Clitheroe and the Fylde Coast.

The new pipeline will provide an alternative supply for people in Accrington, Burnley and the Ribble Valley who are presently fed by the Haweswater Aqueduct.

Dave Dewar, United Utilities project manager, said: "It's not unusual to have to carry out some preparatory work before a major maintenance programme, but an £11million scheme like this is preparation on a grand scale!"...."Because we are working so near the River Hodder we have been liaising very closely with the Environment Agency to make sure that any impact is minimised."